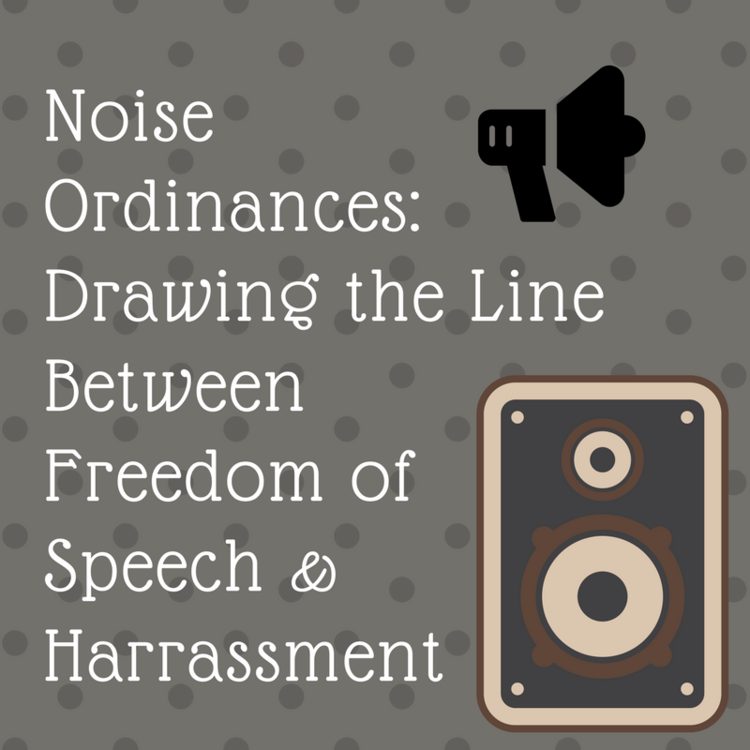 Last month, anti-abortion clinic activity made headlines across the country as state courts made decisions regarding noise ordinances and permits in their area. Anti-abortion activists believe they are practicing their right to free speech while pro-choice advocates argue that excessive verbal altercations should be categorized as harassment imposing on a woman’s constitutional right to choose. Let’s get some background on the noise ordinances currently called into question today.

The first case comes from the 1st United States Circuit Court of Appeals in Portland, Maine where an anti-abortion protestor, Andrew March, challenged the noise provision that has protected reproductive health facilities for over 20 years, specifically, Portland’s Planned Parenthood. The ordinance was created in 1995 and gained support from anti-abortion AND pro-choice organizations. Anti-abortion advocates did not want protestors outside of Crisis Pregnancy Centers while pro-choice advocates wanted to reduce the number of protestors outside of clinics. It was suggested that this compromise would create and environment that would deescalate strong feelings as well and reduce the likelihood of “tragic violence” at any facility.  Though March believed enforcing this ordinance infringed on his first amendment right, the Court of Appeals ultimately decided that March’s voice should not be heard within the medical building in order to protect the rights of patients seeking medical care.

Next up, Charlotte, North Carolina reassessed the way amplified sound permits are obtained in order to protect North Carolina’s busiest abortion clinic, A Preferred Women’s Health Center. The system of permit application was put into place over 15 years ago to create fairness, improve efficacy and ensure access to reproductive healthcare; however, anti-abortion groups were able to obtain the amplified sound permit 80% of the time utilizing an email server that would send over 300 email permit requests in less than 5 minutes. Now, the city has changed it’s policy, so that applications must be completed through the city’s website and eliminate the use of automated email servers. Again, the line between free speech and the right to harassment-free medical care is called into question. Though this is a step in the right direction with patient protection, only time will tell. For more information on A Preferred Women’s Health Center and the struggles they face with protestors, check out the mini-documentary, Care in Chaos, from Rewire.

The final case began in Grand Rapids, Michigan when city native, Stephen Nylen, was silenced for breaching the city’s noise ordinance and “Breach-of-the-Peace” Ordinance. Though a majority of the noise complaints were made outside a Grand Rapids abortion provider, he also preaches in public places including parks, sidewalks, and festivals. Nylen has filed a lawsuit that has yet to be addressed by the city. Though the ordinance in Grand Rapids does not have a clear definition of “noise,” their ordinance does indicate that any speech containing content that listeners do not like can result in arrest.

Post-election, many anti-abortion protestors are emboldened by the President’s stance on abortion and the increase in violence overall due to his presidency and what he represents. By attacking city noise ordinances, anti-abortion activists have started to chip away at the protections put in place years ago.  We must begin to ask ourselves where to draw the line. Is the harassment outsides clinics exercising or abusing our right to free speech? Where is the line between free speech and these harassment and bullying tactics? Providers know this is only the beginning when it comes to clinic harassment, but should they (as small businesses) be subjected to constant police interaction, increased security, and possible “tragic danger” that were predicted over 20 years ago? Only time will tell.

Interested in combatting clinic harassment. Join In This Together Project’s escort team today!

If you’re unable to come to the clinics, please consider a donation to Reclaim’s work as they continue to bust the shame and stigma of the abortion experience or their MI WIN fund to help women afford their procedures. Donate Today!